How I came to love conjugation drills

I definitely didn't see this coming: I've been using our new conjugation trainer for a few weeks—and actually loving it.

As I’ve written before, I’m a staunch believer in learning in context—with engaging content. Conjugation drills are about as boring and out-of-context as you can get.

Waiting for the need

No doubt the first key to loving conjugation drills was waiting until I really felt the need. I recently reached intermediate level in SuperCoco, which means I’d learned about two hundred conversations (about 4,500 sentences).

I dug into our stats, and it turns out that at the beginner level, more than 80% of the verbs are present indicative; 9% are imperative (mostly disculpe and ne se preocupa), 7% are preterite, with just a smattering of other verb forms. With this distribution, it’s pretty easy to absorb them from context. 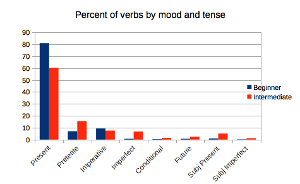 But by the time you reach the intermediate levels, present indicative has dropped to 60%. Almost half the verbs you’re encountering are not present tense, with significant numbers of preterite, imperative, imperfect and present subjunctive. For me, it became increasingly difficult to handle them all intuitively, just from context. It felt ok … but I was regularly running into places where I wasn’t confident. The less familiar forms were occurring more and more, but still not often enough to provide consistent practice.

That’s the point at which I really had a reason to want to know them better.

And since I already knew quite a few verbs and had a decent command of present tense, the drills were much more meaningful for me.

The familiar and the exotic 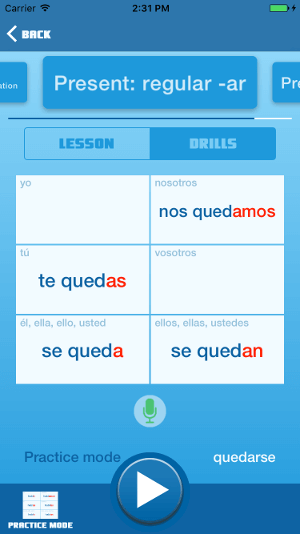 You might think I started with the verb forms I was having a problem with. But it’s very satisfying to take what you already know and truly master it. Despite my familiarity with present tense, I didn’t have complete command of it. The drills gave me that.

At the other end of the spectrum, it feels so good to demystify an “exotic” form such as the imperfect subjunctive. I’ve encountered it enough to be scared by it, but not enough to have any kind of feel for it.

But now that I’m totally comfortable with the form—which is so simple and regular—it’s much less intimidating. That alone feels like a big step in the right direction.

Overview of the whole verb system

One of the things that conjugation drills do is give you an overview of the whole verb system. You develop an understanding of how the different moods and tenses relate to each other. And it’s actually pretty fascinating.

First of all, you realize that—for regular tenses—once you master present tense, most of the others are a piece of cake. Indicative imperfect, conditional, and both present and imperfect subjunctive are simple variations on present tense. And the remainder—imperative, preterite, future—are more complex variations on the same basic pattern. Yes, you could absorb these patterns gradually over time, in context; but it becomes surprisingly easy when you become aware of the patterns.

But it’s not just that the patterns make learning easier. There’s actually a beautiful idea at the heart of the Spanish verb system! It has to do with the relationship between present indicative and subjunctive. 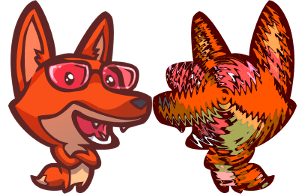 But that’s only if you don’t see the big picture—and only if you haven’t yet mastered the present tense. Because once you do, you realize the genius of the design: the form of the subjunctive in Spanish is a mirror image of the present tense, providing an echo of it—in an alternate reality.

And that’s just what the subjunctive does! The indicative mood is the mood of fact-based reality. The subjunctive mood is for expressions of non-reality: negation, possibility, wish, persuasion, emotion, doubt, fear, and so forth.

The genius idea is that in Spanish, to create the present subjunctive, they took the form of the present indicative and flipped it upside down. The -ar verbs get the -er/-ir endings, and the -er/-ir verbs get the -ar endings. It’s the linguistic equivalent of a mirror image—an utterly poetic way to express the difference between indicative and subjunctive in the form of the verb itself!

There’s one more—quite unexpected—thing I’ve been loving about conjugation practice: it’s turned out to be a great way to practice Spanish vowels. And I am kind of obsessive about working on my accent.

Since the verb endings are all variations using a, e, i, and o (with the occasional u in a stem), and since the practice is mostly by listening and speaking, you get the chance to really focus on the purity and consistency of your Spanish vowels. I would almost say the conjugations are a laboratory for studying vowels. This is incredibly helpful, since one of the gotchas in Spanish pronunciation is failing to clearly articulate verb endings (eg., comen vs coman).

The limits of conjugation drills

With all this love for conjugation drills flowing, it’s important to remember that once you’ve mastered the forms of the verbs, you’ve only just begun the process of mastering the Spanish verb system. Because the hard part isn’t the forms—it’s knowing how and when to use them. Subjunctive, preterite vs imperfect, present vs future, and so forth.

But having the conjugations under your belt makes learning the rest so much easier. Now when you hear a sentence such as:

… you can focus on how the moods and tenses are being used, rather than just trying to cope with the unfamiliar endings.

Which brings us full circle back to learning in context.

Like what you’re reading? Then you probably want to try SuperCoco: